Create an adorable bunny out of papier mache. With a few tweaks, you can use the same method to make other papier mache animals and characters. 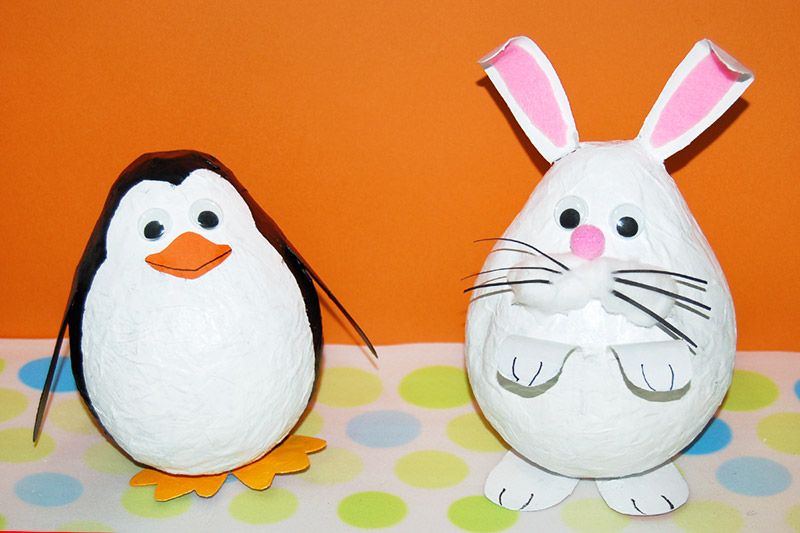 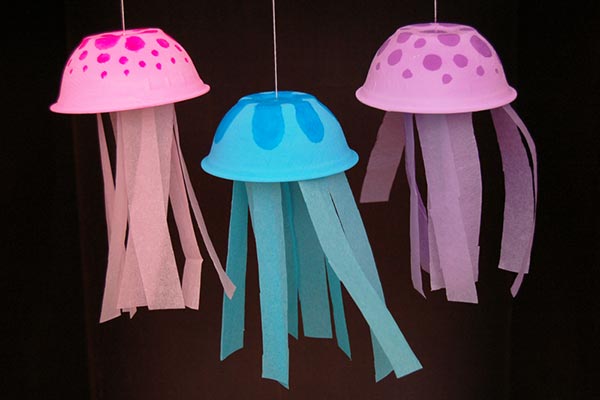 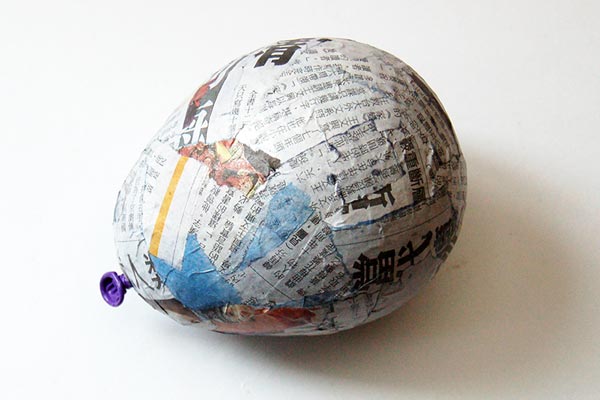 1Papier mache around a balloon.

Make a papier mache around an oval balloon. The steps are outlined in our Papier Mache Balloon page. The papier mache will dry in 2 to 3 days. 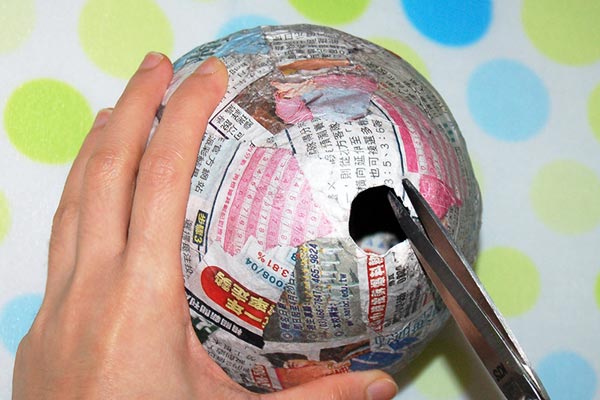 Once dry, pop the balloon. Widen the hole on the papier mache—make the hole just large enough for a funnel to get through (approximately ½ to 1 inch diameter). Remove the deflated balloon as well. 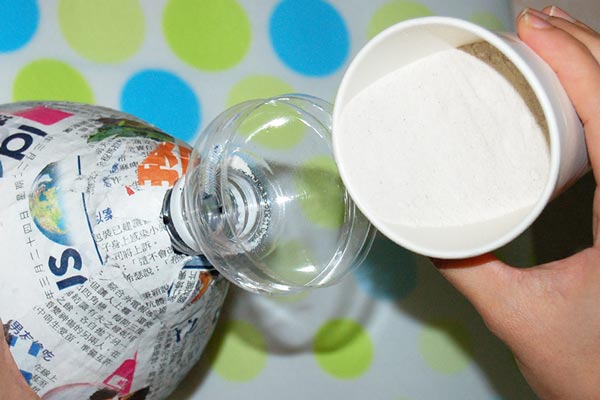 Insert a funnel through the hole and pour ½ cup of sand into the papier mache. 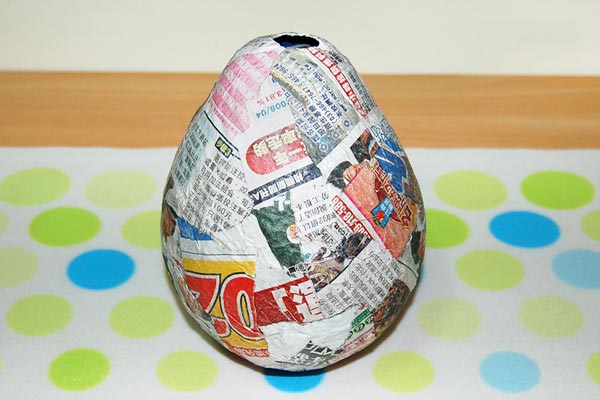 The sand will allow the papier mache to balance and stand on its own. If it's still a bit wobbly, add a bit more sand until it is balanced. 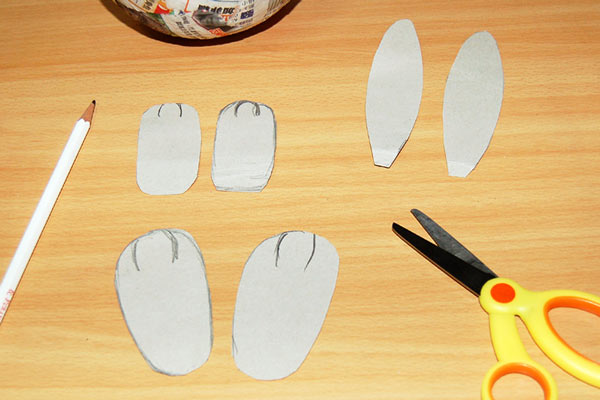 Draw and cut out a pair of ears, front legs and hind legs out of cardboard. 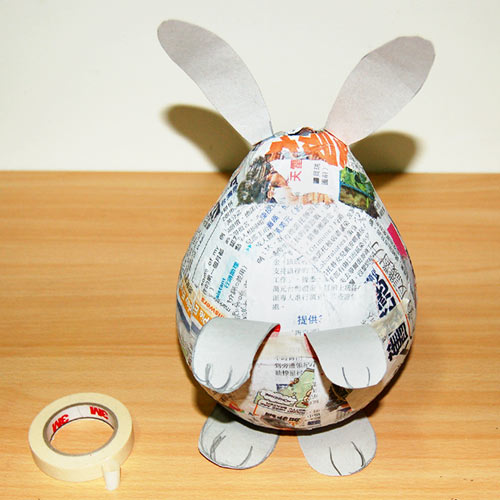 6Attach the ears and legs.

Attach the ears and legs to the papier mache body with masking tape. 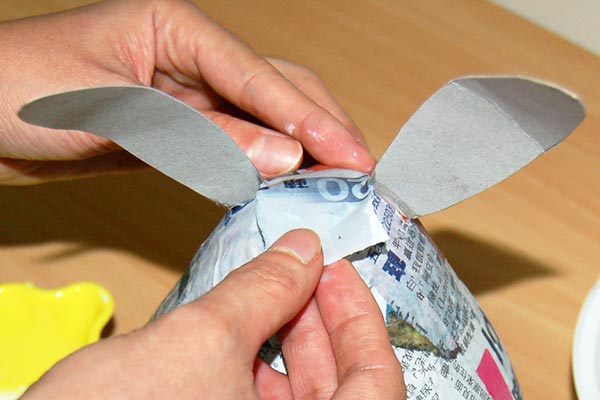 7Papier mache over the hole.

Papier mache over the hole on top as well as over the areas with masking tape. Allow the papier mache to dry. 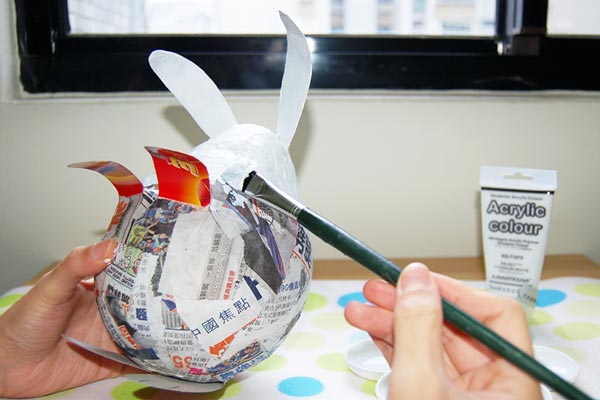 Once dry, paint the entire bunny with acrylic paint. White is a popular color but you can choose other colors like brown, gray, pink, light blue, lavender, or even black. If some newsprint shows through the paint, do a second coating after the first layer of paint dries. 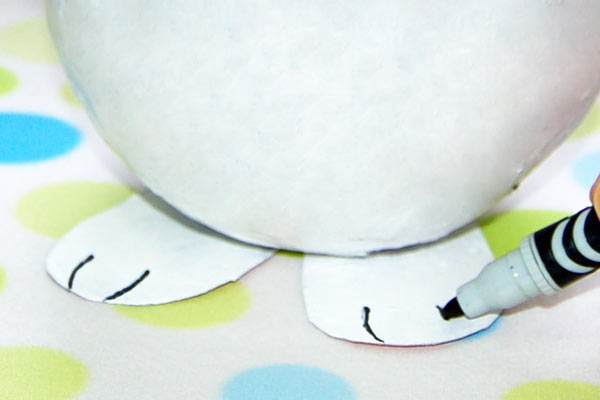 9Draw lines on the legs.

After the paint dries, draw a pair of lines on each front and hind leg using a black permanent marker. 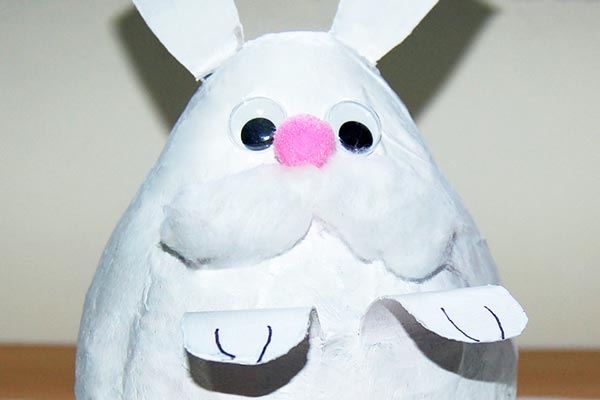 Add eyes, a nose and a fluffy snout by gluing any of these materials: 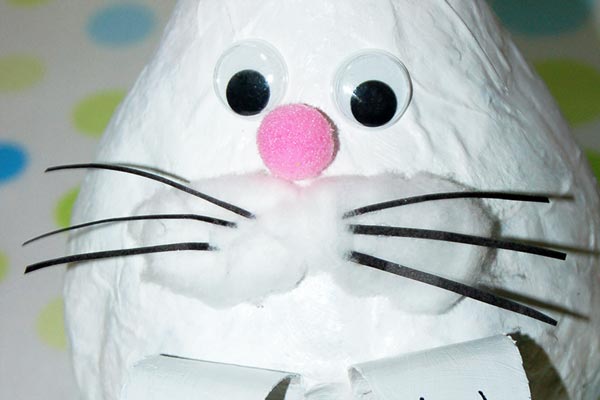 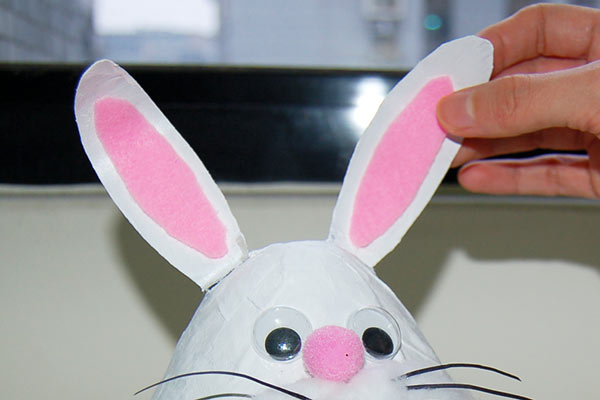 12Glue ovals on the ears.

Cut out a pair of ovals from paper, felt or foam. Glue an oval onto each ear. 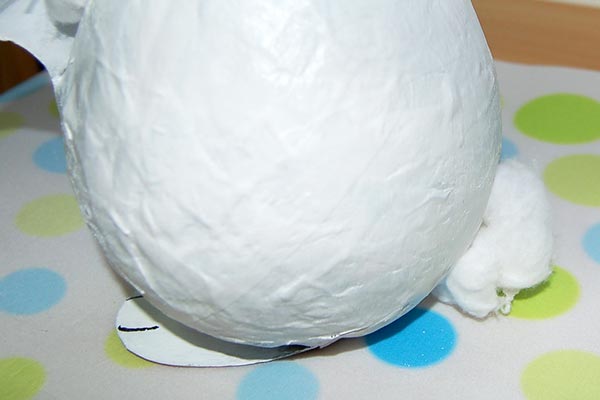 Roll cotton into a ball. Glue this behind the bunny, close to the bottom, to create a tail. 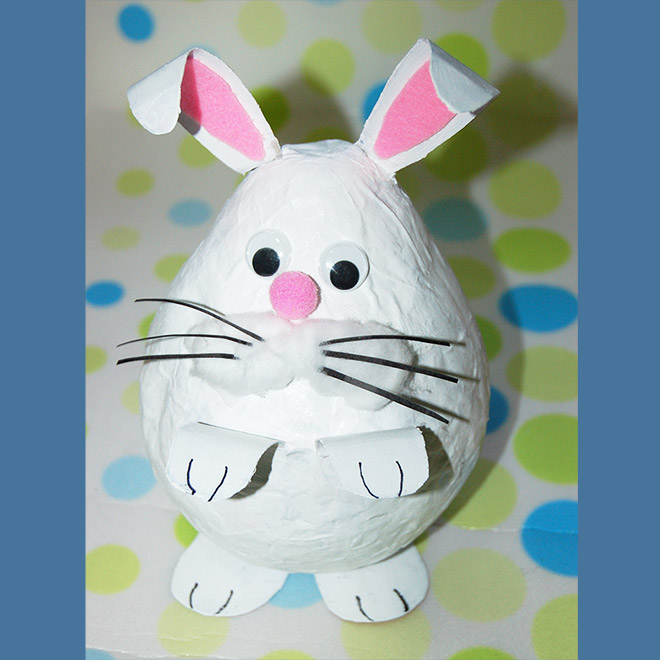 Slightly bend the bunny's ears forward, if you like. Add some cute touches, like a carrot or an Easter egg, that you can make from paper, felt or foam. Enjoy your adorable bunny! 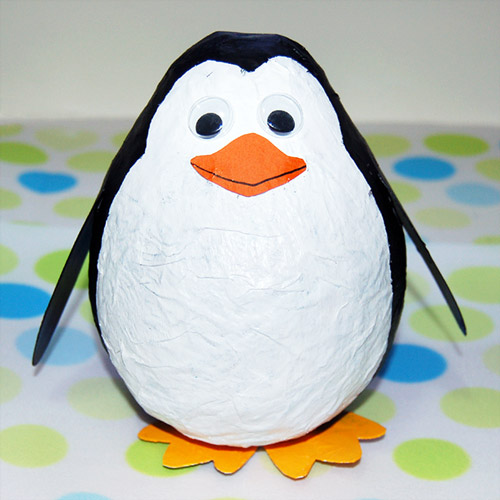 Follow the same method to make other papier mache animals. The main difference and the critical step will be the cardboard parts that you need to attach to the papier mache, like legs, wings, ears, etc.

For this cute penguin, a pair of oval-shaped wings as well as a pair of bird feet were cut out from cardboard and taped onto the papier mache body. After painting the penguin black and white, a pair of wiggle eyes and a paper beak were glued on.

Try making other papier mache animals like a chicken, pig, mouse or owl. Characters like Pikachu, Mr. and Mrs. Potato, Garfield or Humpty Dumpty, can similarly be made into papier mache projects. 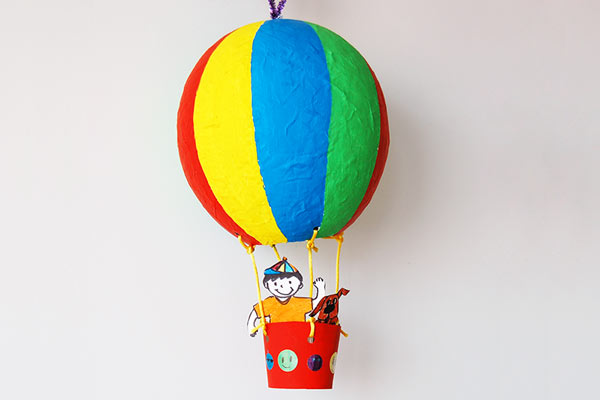 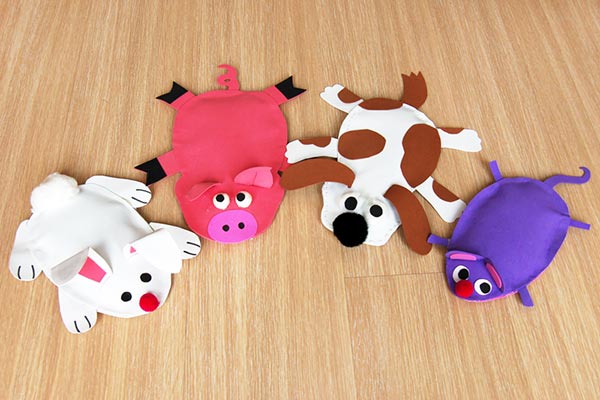 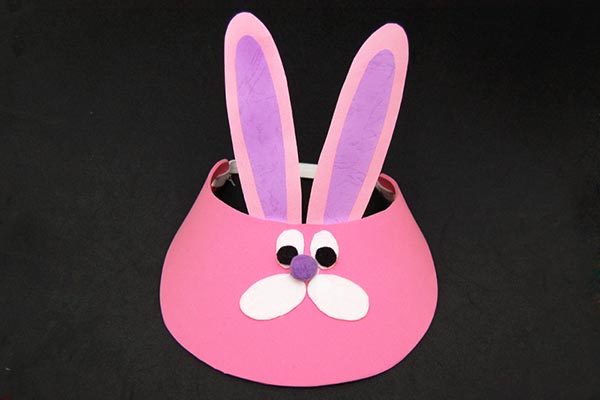 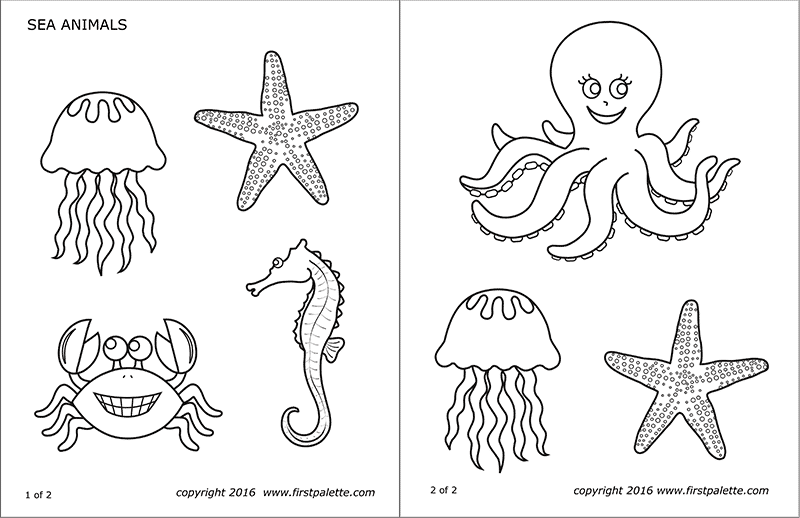